The lumpia vendor who uses a hardhat as a cycling helmet

The Philippines is definitely moving forward from the effects of this pandemic and industries are starting to recover now. However, there are still people who are left behind. Arthur Moya is one of them. 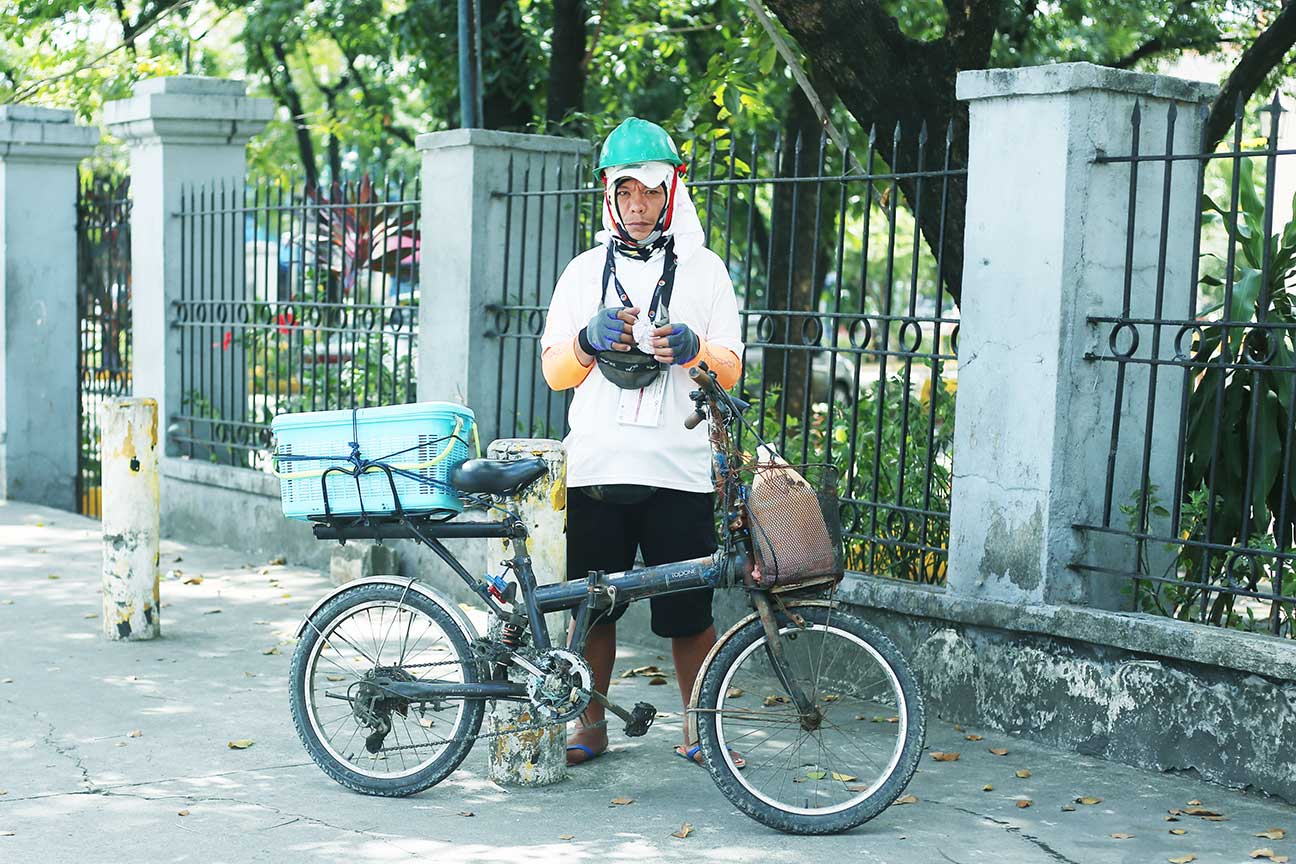 t was painfully hot that morning and 57-year-old Arthur Moya was pedaling with a box of lumpia on his rear rack and a gallon of vinegar inside his rusty front basket. He’s using a deteriorated bicycle, a second-hand foldie.

We noticed that he’s wearing a hardhat, a headwear usually used by construction workers. He said that he can’t afford to buy a proper bike helmet and uses this alternative hat instead so that he could get away from being fined in Quezon City. He recalled that a bike helmet costs 500 to 600 pesos.

Quezon CIty has a helmet ordinance where people caught without wearing this safety gear are fined 300 pesos for their first offense.

He gets 2 pesos from every lumpia that gets sold, and he earns around 250 pesos a day. He works six times a week, from 10 am to 5 pm. Arthur said that he doesn’t own the lumpia, his neighbor buys the ingredients and he’s just selling it in the streets.

Before the community quarantine, the cyclist worked as a doorman in a restaurant in Manila. The business was forced to close due to the pandemic restrictions and it did not recover ever since. As a result, Arthur lost his job.

How can he live a decent life with only 250 pesos a day?

On top of his meals and other expenses, he’s still paying 100 pesos daily to an Indian who lent him money so he could afford to buy the worn out bicycle.

You see, he started selling these lumpia by just walking along the inner streets of Quezon City. The Indian who lent him money pitied him and offered help by letting him borrow money so he could afford a bicycle, something that would make him move faster, cover more ground and get many customers.

When we met Arthur, we just had an extra helmet at that time. But we’ll get in touch with him soon to give him a decent bicycle that he could use for his livelihood.

The Philippines is definitely moving forward from the effects of this pandemic and industries are starting to recover now. However, there are still people who are left behind. Arthur is one of them. We asked him if he has a wish in life.

First Bike Ride and The Curator are raising funds for cyclists who can’t afford to buy safety gear such as helmets and bike lights. 100% profit from The Curator’s weekend slushies during the whole month of February will go to the fundraiser.