Thanks to biking: From domestically abused to bike lane champion

“I wanted to give back to biking. It healed me and empowered me so much and it made me so happy. Sobrang happy ako ngayon compared to before,” Ann Angala said. 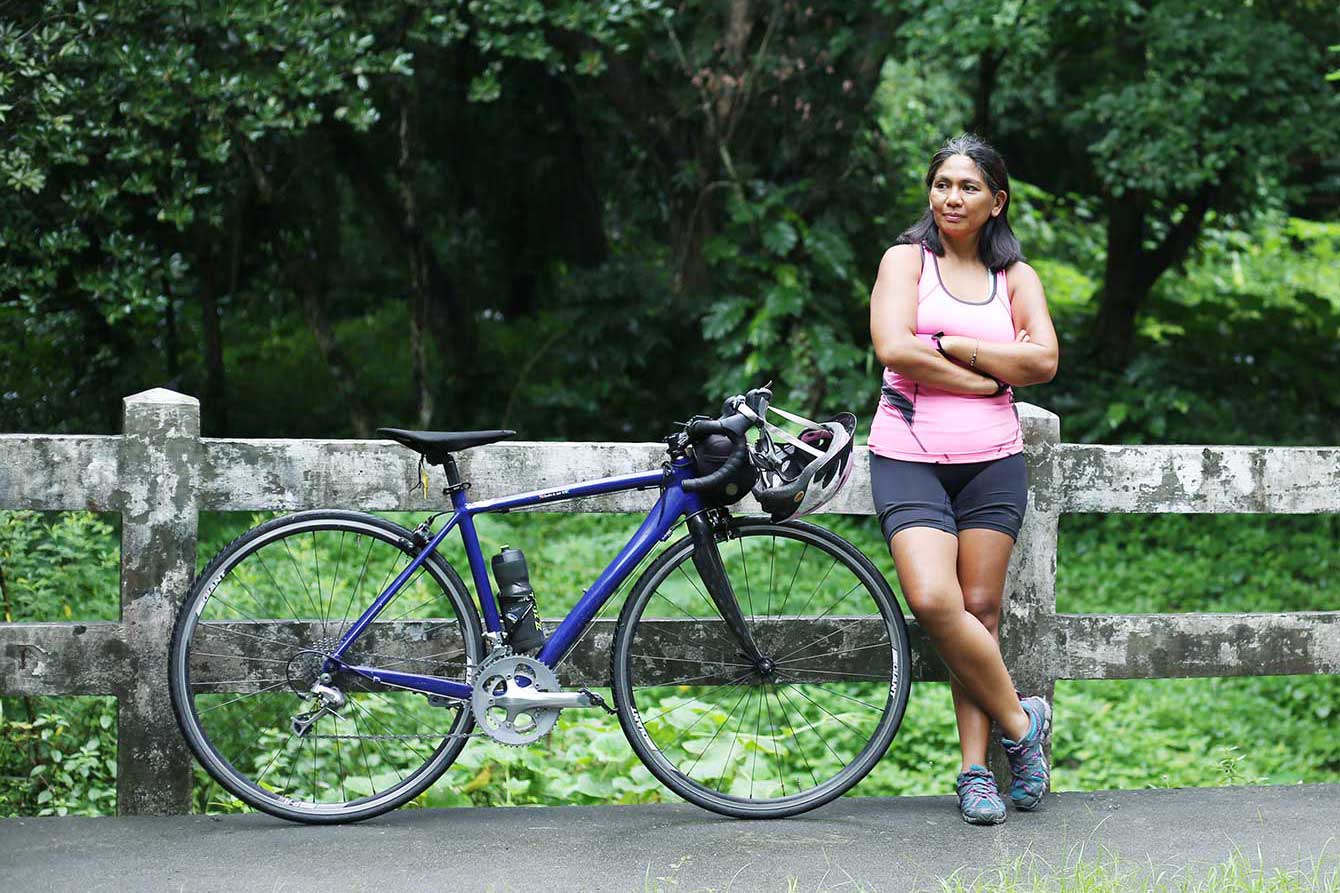 She was domestically abused for 18 years and cycling healed her.

Ann Angala never thought that a bicycle could change her life. She just knew that it was something that made her happy as a kid, cycling around Vigan with her cousins and going to nearby towns for fun. In 2017, at the age of 47, she started riding a bike again to revive this feeling.

“I was domestically abused for eighteen years but you don’t see it from me now because biking healed me. I was beaten up to the pulp but because of biking, it healed me and I’m still healing until now,” Ann told First Bike Ride. “I needed to find something to empower me, to take my mind off my abuse.”

To escape her abuser and to get better, Ann went to the United States and stayed there for almost a year. She thought that she was already fine when she got back in the Philippines but all of her trauma ultimately returned.

Whenever she rides a bike, she forgets all of her problems and it eases the anxiety that she’s experiencing. She’s more happy now, all thanks to this two-wheeled ride.

She started late, she mentioned. During a Bible study in Antipolo five years ago, she met a woman who arrived with a bike helmet. That time, Ann wanted to go biking but never had the time and confidence to ride. With so much courage, she asked the cyclist if she could teach her to bike around the busy streets of the city.

The following day, the woman went to her house and they biked along Taktak Road. During their practice, they met more cyclists who eventually joined to help Ann be confident on the road. This small group trained her for days until she became confident in commuting all by herself.

“It was very fun kasi nga una akala ko mahirap. Fun pala siya. I was with a community na very embracing. Hindi nila ako na-outcast dahil hindi ako marunong at ngayon lang natuto kasi insecure na insecure ako dati,” she said. “It was a very pleasant experience. And I think that will really get you into biking kapag may mentor ka and an encouraging community who will teach you. Ang hirap matuto ng bike commute by yourself eh.”

When Ann got the confidence of biking by herself, it became her main mode of transport. Before cycling, she already vowed to eliminate driving a car to move around as her contribution in reducing carbon emission. She was using public transport or renting vehicles if she needed to go somewhere. And through biking, she managed to restore her personal mobility.

Little did she know that biking would bring in more than just fun. According to Ann, cycling took away all of her anxieties and it healed her from her trauma.

“It did help me. Kapag nagkaka-anxiety attack ako anytime of the day, konting padyak lang at naka-focus na ako sa bike. Tapos the things that causes my anxiety get off my mind,” she said. “Biking was a tool for me to heal and empower.”

Before cycling, she was already an anti-abuse advocate who helps women who experience trauma and maltreatment. The things that she was doing synergized, Ann recalled. She realized that through her voice, others can also learn from her experience where a bicycle paved the way for her healing.

“I wanted to give back to biking. It healed me and empowered me so much and it made me so happy. Sobrang happy ako ngayon compared to before,” she said. “So sabi ko, if it heals wounds as painful as 18 years of domestic abuse, what more can it do to other people na hindi kasing bad na naranasan ko? I want to teach that to the world. Biking is a good tool to make you better.”

Eventually, Ann became a cycling advocate. She encourages more people to ride a bike and actively participates in calls for better biking infrastructure in the country. She co-founded Bikers United Movement, a group that was active during the pandemic in installing pop-up bike lanes. This endeavor, along with the initiatives of other organizations, eventually resulted in permanent cycle pathways in the country.

This cyclist is already 52 years old and she’s glad that her children are still very supportive of her hobby and advocacy. In fact, in their family, she’s called the “wild child” because she’s always out taking on adventures.

She inspired people to ride a bicycle. In our society where biking is seen as a male sport, Ann breaks barriers and proves that she can do it despite being a mom, more than 50 years old and especially a woman.

“A lot of women and a lot of moms like to bike. It’s just that sobrang disempowering ang society at infrastructure natin. Hindi totoong mahina ang babae. My position is uncommon but not impossible,” she said. “Sometimes you’d think that being a mom of five, siklista ka, how’d you do that? Just do it. Gawin mo kasi if you keep on doing it, you can.”

Ann is not yet completely healed, she admitted, but she’s happy and is doing better — all thanks to cycling. This biker can be found randomly biking in places. Her go-to place is UP Diliman but you can see her updating on social media that she’s going places: this year, we saw her riding a bike in Los Banos, Palawan and Ilocos, among others.

Aside from cycling, she continues with her advocacies. Perhaps because she’s already in a better position, she really wants to help and make things better for others who are experiencing what she has gone through.

Before we ended our conversation with Ann, we asked her about her dream.

“The ultimate dream is for the Philippines to be a safe space for everybody. To do what you want to do and be who you are.”