Is he friends or relatives with the reporters who did the newscast? Not really. Here are the stories behind the three viral screenshots. 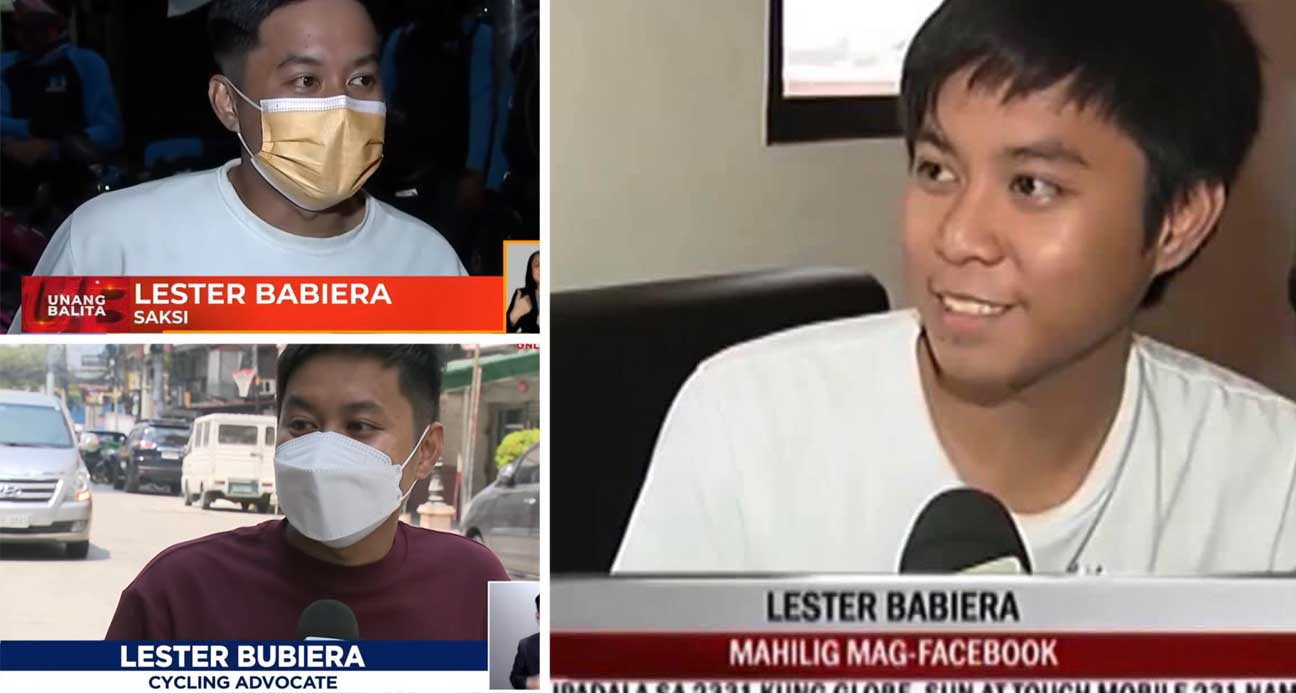 Screenshots of Lester Babiera’s news interviews — detailing his “glow up” and “character development” from “Mahilig mag-Facebook” to “Saksi” to “Cycling Advocate” — went viral and netizens ask this question: how this dude managed to score TV exposure many times?

Well, in case you didn’t know, I’m that guy. I run this cycling website First Bike Ride. And I agreed to appear in the last two interviews because I want to show in mainstream media that cyclists are part of our roads and that they need to be protected.

Am I friends or relatives with the reporters who did the newscast? Not really. Here are the stories behind the three viral screenshots.

The first news interview that I had was in 2011 for TV Patrol. My friend, who was a radio producer at that time, asked me if I had tried Facebook’s video chat. It was new that time and I told her that I did. She mentioned that reporter Alvin Elchico was looking for someone to be interviewed and I agreed.

Alvin’s crew went to my house in Manila, we taped the report and the news was aired that evening on TV Patrol, Bandila and Umagang Kay Ganda the next morning. I was surprised, and weirded out, that I was branded as “mahilig mag-Facebook.”

It’s funny and overwhelming. I enjoy Facebook but you see, I don’t know if I like being that guy who got known nationwide (plus the TFC subscribers abroad) as someone who really likes this social media platform.

A few weeks ago, I almost figured in a road crash. A drunk motorcycle driver nearly hit me when I was cycling in the intersection of Maceda and España in Manila. The motorbike rider crashed into a delivery truck. GMA reporter Darlene Cay and her team appeared on the scene and asked me for an interview as a witness.

I wanted to help the poor truck driver because the drunk passenger of the motorbike was lying to Darlene, even saying that he’s unsure if they were hit by the truck driver. CCTV was not working and I was the only person who saw the whole incident.

As someone who was passionate about anti-drunk driving advocacy, I also wanted to take this opportunity to speak up. Imagine, these irresponsible and law-breaking drivers could have hit and killed other vulnerable road users like pedestrians and cyclists — drunkards could kill me or even you who’s reading this article.

Just a week after the GMA report, ABSCBN journalist Jacque Manabat messaged me on Twitter if she could interview me with my bicycle. I didn’t know that it was for TV Patrol because I thought that she’s not covering transport issues anymore and shifted in following a presidential candidate.

She was working on a feature about the situation of cyclists in Metro Manila now that we’re in Alert Level 1. As a cycling advocate, I am always ready to forward my cause. Aside from being visible on the road and on social media, I thought that being on the news would strengthen the bicycle’s visibility in the consciousness of the public and those who are in power who can change, help and improve the system for us.

Jacque knew me through my friend Ara whom I met in Singapore. Last year, the ABSCBN reporter was looking for a cyclist to participate on her Twitter Space discussion about cycling in Metro Manila with Pasig Transport’s Anton Siy and MMDA’s Bong Nebrija.

I posted the three screenshots on Twitter, an update to my previous tweets that also went viral on the bird app. All of a sudden, when I went home and checked my phone, my notification tab was exploding with retweets, likes and comments. The replies and interactions were funny, to be honest.

The next thing I knew, Klasik Titos and Titas of Manila posted my tweet on Facebook, Kabulastugan uploaded it on Instagram, Philippine Star Life wrote an article about the viral screenshots and my chaotic story was shared by thousands of people.

Friends were messaging me and random people gave me friend requests and messages. I didn’t have time to answer everything when this was on its peak because I was busy talking about First Bike Ride on a webinar hosted by a national agency.

To be fair, I had a few TV appearances before. I was interviewed on Channel News Asia when I represented the Philippines in the ASEAN Youth Camp in 2013. When I was a writer-producer for MYX Philippines, the staff did cameos from time to time. Last February, I talked about cycling on DZRH News TV’s “Health Check +” show.

While I attempt to shift to a serious branding of myself, it seems like the world wants to keep me on the comic side. Well, I would take it as long as I get to keep my message and advocacies across many people.

In a recent publicity material shared by Philippine Star, it quoted me saying, “My friends are joking with me, telling me na, baka next time PBB Housemate na raw ako.” They picked that among all the things I said. In any case, I found it funny. And why not? If I get to reach more people with my stories and what I fight for, then I’d take it. Kuya, I’m ready. Just kidding.

Anyway, my podcast “Tambike Session” will go live on March 10, 8am. It will stream on Spotify and Anchor. It’s a podcast by Anima Podcast.