Soleil Ignacio: the artist, cycling and her beautiful bicycle

One can definitely say that the look of this beautiful bicycle is a product of the artist’s creativity, a result of Soleil Ignaci's taste and aesthetics. 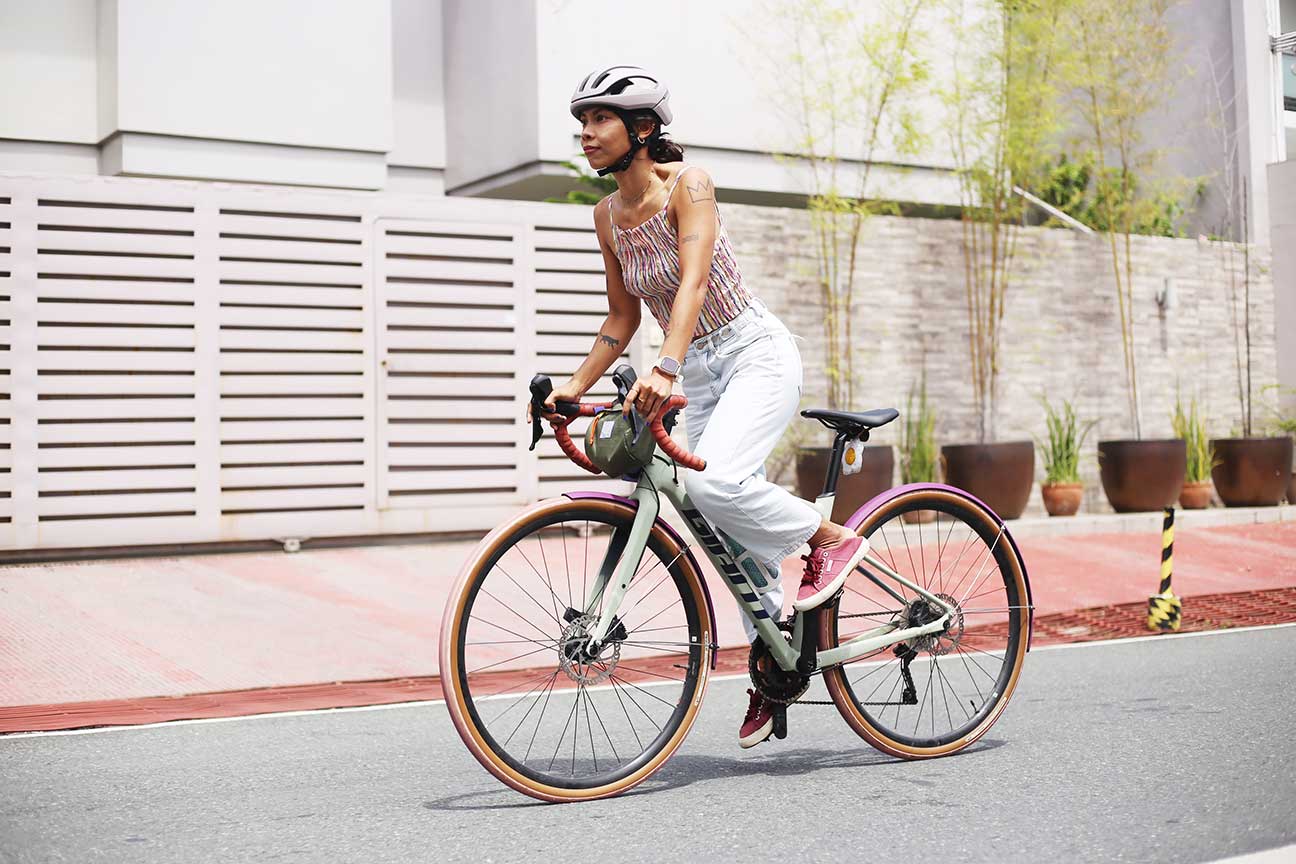 That day, she was wearing faded jeans, a grey POC helmet, violet shoes and a ruched top that has strips of pink, purple and yellow. The colors of her look matched the accents of her bicycle, a Giant Revolt gravel bike in desert sage.

She bought the bicycle online and majority of the parts on this ride was included in her purchase except for a few components that she changed and some additional accessories. She’s rocking pink slick tires from Panaracer Gravelking matched with an SKS Bluemels fenders that she spray painted in purple.

The bar tape was originally in black and she replaced it with an orange Brooks Cambium bar tape. Other accessories in her bike include a cute egg reflector from A Snail’s Pace, a handy Blue Lug handlebar pouch and a reliable feed bag from Sack It!.

One can definitely say that the look of this beautiful bicycle is a product of the artist’s creativity, a result of Soleil’s taste and aesthetics.

Soleil’s art is very feminine, attractive and stylish. The combination of her subtle colors brings more attitude to her subjects — which are usually morena women — and gives a unique and strong sense of empowerment.

This artist started biking with a mamachari for her short commutes and eventually bought a road bike last year. After a few months of enjoying lengthy rides around the city and adventures in nearby provinces, she thought that it would be wiser and more comfortable if she’d get herself a bicycle — something more suitable with wider wheels for long distance cycling.

Since she’s been regularly cycling for over a year now, she managed to learn the technical stuff of the bicycle. Soleil made sure that she’s not just getting a pretty bike but also a machine that can make it easier for her to traverse various roads.

A versatile bicycle that can manage the bumpy city roads, the steep inclines and dangerous downhills but can still provide decent speed and endure extensive rides is perhaps the best bike for Soleil.

Her Giant Revolt is installed with a GRX group set and she particularly enjoys the hydraulic brakes. She noted that this bike is easier to control because her two other bicycles are running on a mechanical braking system.

This cyclist bikes to her work everyday — she’s one of the managers of Studio Kapitbahay. Sometimes, she’d ride her bicycle to visit sites and find inspiration. And on weekends, along with her other friends, Soleil takes on longer rides outside Metro Manila.

Aside from coffee rides in the city or some random short trips to BGC, Soleil has already biked to far places like Boso-Boso in Rizal and Arayat in Pampanga. Her next goal? She wants to bike with friends all the way to La Union.