All parts were planned out well for versatility, convenience of use, flexibility and most of all, comfort — things that fit Pao’s riding style and intended use. 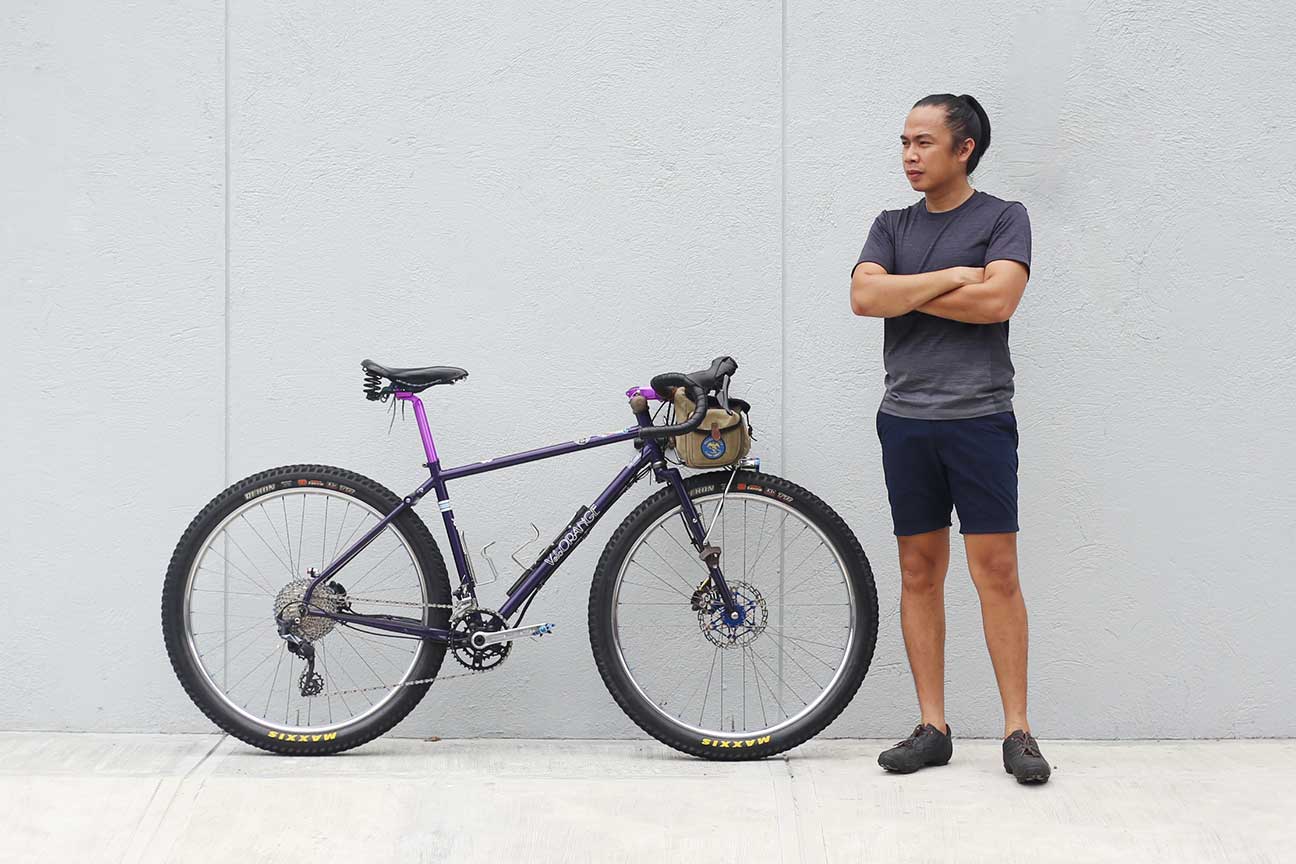 Bottles of San Miguel Pale Pilsen were tightly secured in front of Paolo Esguerra’s bike rack. He just came from work, secured some beer and was on his way back home to Quezon City. That’s what we saw a few months ago as we stumbled upon one of his Instagram stories.

The cyclist told us that he’s using his Velo Orange Piolet that day, his bike that he’d usually use for his commutes in and around the city.

We’d see him on weekends or doing longer rides with his white Surly Midnight Special or he’ll sometimes be spotted on his single-speed Niner. But on weekdays, he’d most likely opt to use his Piolet because of it’s convenience.

Back in 2014, Pao became friends with cyclists from the group Surly Fffinas and that time, he started doing more long rides apart from his typical off road adventures. That year, he was still only using his single-speed Niner and was having a reasonably difficult time with lengthy trips.

To solve his problem, he first built a mountain bike with drop bars. But Pao said that the bike just felt wrong and he was not happy. Then came the point when he finally decided to get a geared bike — but he didn’t want to settle on just any bicycle.

He was quite specific with what he wanted: a steel frame that is not suspension-corrected, could handle large volume 29” wheels and had an as-close-to-horizontal top tube that he could find. In his words, “Gusto ko ‘yung mukhang road bike pero mataba ‘yung gulong.”

And that time, the Velo Orange Piolet was the only frame available that met his criteria. So Pao went to Rose Chua of TryOn, the bike shop that imports Velo Orange products into the Philippines, and reserved one unit. He was told that the waiting time for his order was gonna be around a couple of months.

Pao admitted that he initially wanted the bike’s first generation model because of it’s color, French Blue. However, TryOn said that it would be impossible for them to source that particular model because the new, revised Piolets were the ones in line to arrive. The order was also delayed an entire year because of this model change, something that really tested Pao’s patience.

“I got the frame on June 30. Naalala ko ‘yun kasi birthday ko ‘yun and we were having a small celebration at home when I received a text that the frame had arrived, a celebration that I hurriedly left to pick up the frame. That was in 2018, almost a year and a half after I ordered it,” Pao recalled.

The parts for his Piolet were carefully picked and curated, just like those that are on his other builds. Similar to what he always tells us whenever we hang with him, components that are found on his bikes are components that he really wanted — that it’s just a waste of money to settle for something that is sort of “pwede na” and you’ll eventually replace because you’re still lusting after that part you want or like more.

For his Velo Orange, he explained to us that coming up with the drivetrain was a bit complicated. He wanted to install STI shifters that are usually found road bikes but he also wanted gearing similar to that found in mountain bikes, without the use of a Tanpan. And this was before the days of Shimano GRX which eventually solved this dilemma.

The Ultegra RX was the first road RD of Shimano that featured a clutch mechanism which maintains chain tension over rough terrain. As someone who likes off-road riding, this is pretty convenient.

His bike’s crank setup is interesting too. The White Industries M30 crankset with 40/26t chainrings up front is something he got from his friend Dundee G. He had to use a Shimano XT front derailleur with an in-line barrel adjuster for it to work with the STI shifters.

What he particularly likes about White Industries crank is that it gives the rider the incredible flexibility when it comes to chainring combinations. It uses the Variable Bolt Center (VBC) System which allows the switching of chainrings without having to swap out the crank arm spider.

This bike’s custom wheel and tire setup is awesome too. For Pao, hubs are extremely important because they dictate a huge part on how the drivetrain feels and performs. He has an Onyx Classic rear hub partnered with an SP Engineering PD-8 front hub dynamo.

The hubs were all purchased from Slow Moes Culture while the Velocity Dually rims were purchased from a friend. Bronze CN spokes and blue nipples finish off the build. The wheels are wrapped in massive Maxxis Rekon 29×2.6 tires which he runs tubeless, perfect for rolling over pretty much any kind of terrain.

The hub powers his Sinewave Cycles Beacon dynamo light which also has a USB charger that comes in very handy in emergency situations if he needs to charge any of his gadgets.

Another interesting part of this steel bike is its Chris King SteelSet, a model that has long been phased out by the manufacturer. Its made of steel rather than aluminum and its bronzy finish patinas over time, adding a unique touch to the bike.

The weight of his bicycle might be heavy but it’s definitely not a burden according to the rider.

“I never built the bike to be light in the first place, actually lahat naman ng bikes ko mabigat. ‘Yung bike na ‘to, walang carbon parts and most of its components are heavy so hindi talaga siya talaga built to be light,” Pao said.

All parts were planned out well for versatility, convenience of use, flexibility and most of all, comfort — things that fit Pao’s riding style and intended use. For example, he’s using a black Brooks Flyer saddle which is very heavy but also very comfortable, especially for longer days on the bike.

What are the other parts of his bicycle? He uses a 70mm Boxcar stem paired with a Tall and Handsome seatpost both from Paul Components, both of which are finished in anodized purple. The bike’s also uses a ridiculously wide Towel Rack drop bar from Crust Bikes, wrapped in Brooks Microfiber bar tape for increased comfort. Ironically despite it’s 61.5cm c-c width, this is still Crust Bike’s narrowest offering.

We asked him, what’s his most favorite item on his Piolet?

Well, it must be really hard to pick a favorite.

“Mukha siyang simple but there are reasons behind each part, lahat ng nakakabit sa bike may purpose,” Pao said.