Justin’s Look AC364 is definitely an eye candy, a head-turner. Not to mention, it’s really cool to see this bike and this biker rolling fast on the road too. 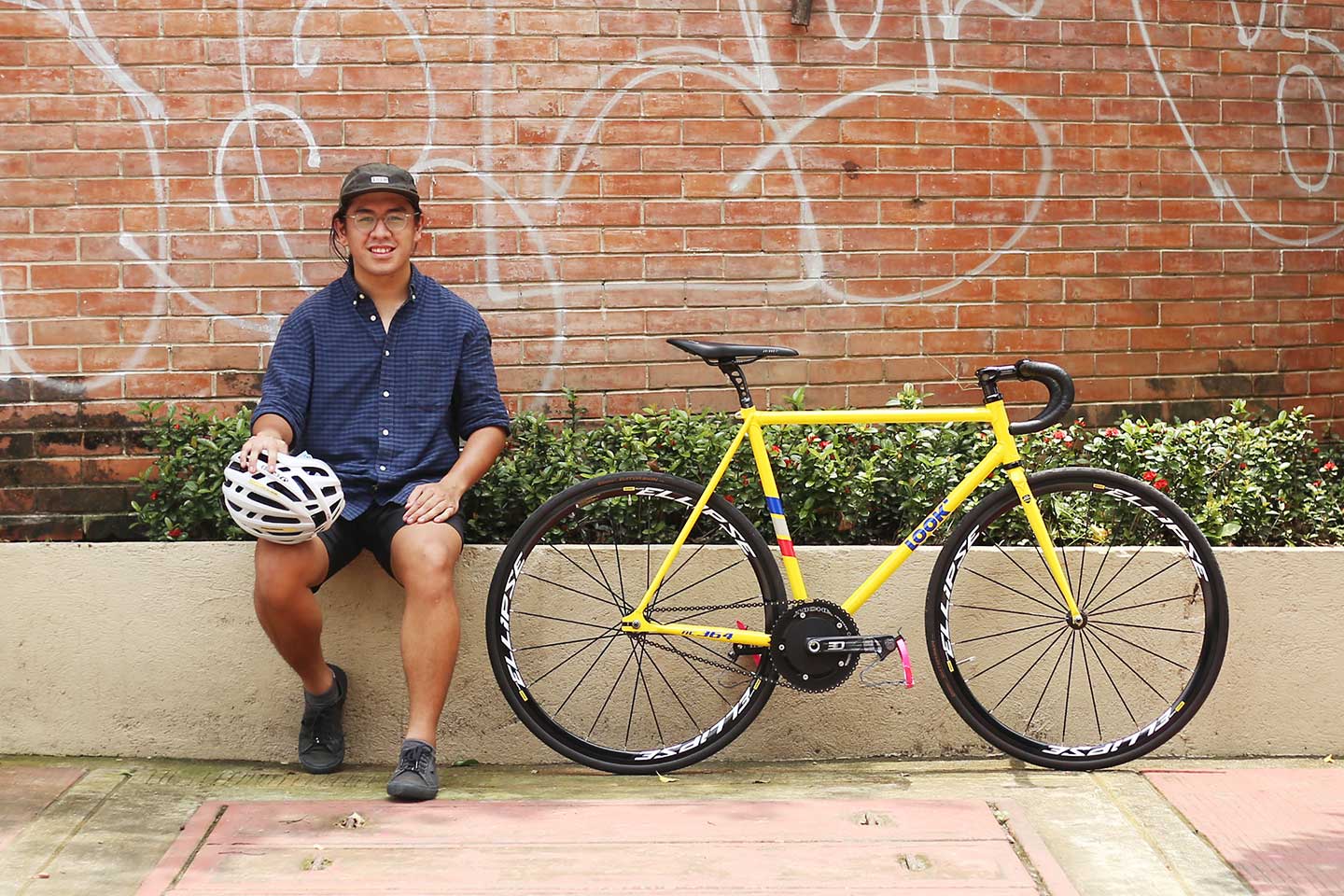 When Justin de Dios saw that a brand new Look AC364 frameset was up on sale at a local bike shop in San Juan, he immediately sold his Bianchi that he just built and purchased the gorgeous yellow frame.

(It’s somewhat an ‘impulse buy’ because it’s difficult to find this. This is really a keeper bike. It’s like this is on a dream bike level. Before this, I think I had four fixed gears before I arrived at this one.)

Justin, who handles the Instagram account @manila.commuter, started his cycling journey in 2014 with a fixed gear. Even up to now, after seven years of biking the streets of Metro Manila, he still regularly uses his fixies.

So what is Look AC364? It’s made by a French sports equipment company that pays homage to their famous track bikes or bicycles that are used on a velodrome. This chromoly steel frame has a vintage look with modern geo.

Well, in the case of Justin’s build, he particularly wanted to make this a tarck bike that’s suitable for Metro Manila roads.

For those who are not familiar, a “tarck bike” is a track bicycle that is used on the streets and not on a velodrome.

The inspiration for Justin’s bicycle came from the different Look AC364s on Instagram and with influences from the popular fixies found in the streets of New York. According to this cyclist, he didn’t want to just put random things on his bike.

This cyclist gave himself three months to finish this — it only took him two weeks to build it. He was able to source the needed parts and had it assembled by Gilbert Chan of Simple Cyclery.

And just like his initial time frame, the original plans did not happen too. He first imagined making all the parts of his cockpit to be made out of quality bike component brand DEDA but it did not materialize because some were difficult to source.

In addition, he also managed to procure other quality parts from good brands with appealing deals.

He got his 44cm DEDA Zero2 Drops from Colnago Manila. His magnetic top cap and black bar tapes are from the same brand too. Well, the stem was supposed to be a DEDA but he managed to score a Thomson Elite X2 90mm.

(I wanted to use Thomson for a very long time. For fixed gear builds, this is what they usually  use for upper mid to high end builds in the States. Usually the messengers in New York, those who have Cinellis, use this.)

The headset is a black Ritchey Comp that he bought from Built Cycles. It was supposed to be from DEDA too but he realized that he should attach something that could also be compatible with his other Cinelli forks just in case he switches in the future.

Since he pictured his Look AC364 as a tarck bike, Justin thought of installing a saddle that’s made for speed. He got a Fizik Arione R5 from Bikezilla. His seatpost is a 27.2 Miche Supertype — which was again supposed to be a DEDA but he can’t find a black one — that he obtained from Simple Cyclery.

For his wheels, since Look is created by a company from France, Justin thought of using French wheels too. He’s spinning a 700 x 25c Mavic Ellipse wheelset. His tires are Continental Gatorskin.

(I got 25c because it’s the safest in our streets. It’s hard to find something larger. Continental Gatorskin performs best because if you are on a fixed gear, you use this as your brakes or for skidding. It lasts long. This doesn’t get flat easily even if you’re on tubes.)

The Look’s gearing is 50-15. The 15-tooth Shimano Dura Ace cogs was acquired from Auntie Rose of TryOn Marketing, same with the 50T Miche Advanced Pista. His Izumi jetblack (black and gold) track chainring came from this Makati-based bike shop too. Meanwhile, the arms are Rotor 3D24 Track Cranks that he bought from another cyclist who got it from Mash SF.

Justin admitted that the highlight of the bicycle is the yellow frame. So he was very particular in getting black parts. However, he wanted to spice it up a bit by giving a touch of color on the pedals.

(For the build, I wanted to highlight the frame. Because that’s the centerpiece, the heart of the bujke. Then purposely, accent colors were created because I got bored with just two colors.)

His pedal is a black MKS GR-9 Platform but he replaced the original straps with a pink MKS single straps and attached a blue Wellgo double toe cage.

Justin’s Look AC364 is definitely an eye candy, a head-turner. Not to mention, it’s really cool to see this bike with this biker rolling fast on the road too — well, perhaps that would depend on the power of the cyclist.

(I use it just to go around, not when the trip is not work-related. Actually, it’s becoming a weekend bike. It’s a super nice bike, I think all of my choices for the build are correct. Everytime that I use it after some time, I’m enjoying it. I think I give more mileage because I like how it rides.”

Some photos are from Justin de Dios.

“Awesome Bicycles” is a new category of First Bike Ride where we focus on incredible bicycles – how it was built, its story or just because we think it’s awesome.